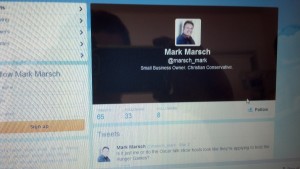 Self proclaimed “Christian” conservative Mark Marsch deleted his twitter account this weekend after I discovered a tweet of his that described undocumented workers as “illegals”  and was pretty mmmm lets say not in keeping with the “christian” faith.

Mark you do know you can just delete the tweet right? No reply needed…

TRUTH IS A COMPLETE DEFENSE AGAINST LIABILITY FOR DEFAMATION, REGARDLESS OF BAD FAITH OR MALICIOUS PURPOSE Krubinski vs Schmutzer