In a series of emails that WICRLeaks and DeckExpert.com has obtained from a ex-employee of Wanke Industrial Commerical Residential (WICR), there is convincing evidence that David Krubinski, aka David Mazor, is the owner of WICR, runs their daily operations and from what the ex employees all say, doesn’t want anyone to know it.  Jose Ortiz worked for WICR from August of 2008 until November of 2012. He has produced various copies of emails and other documents tying Krubinski directly to WICR business. Two other ex-employees have also stepped forward to DeckExpert.com, alleging similar transgressions. 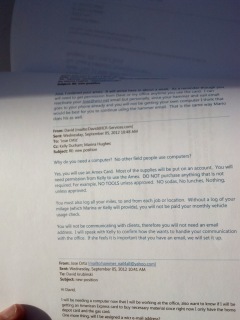 The public figure head of the company is Fred Wanke. He is listed at CSLB’s website as the RMO (Responsible Managing Officer). Ex-employees  say that he is by all accounts, Krubinsiki’s lackey, executing the orders sent down from Krubinski.  Emails we’ve seen show that while he is cc’d in on the issue, Krubinski doesn’t really ask him for approval,  it appears Fred is merely being informed of the decisions.

Since our earlier post about WICR this past week, another ex-employee has stepped forward with their tale of David Krubisnki. The three people we have talked to that are close to WICR all say the same things-Krubinski is paranoid to a large degree about keeping his name off WICR. He uses his wife, Attorney Irina Drill to scare employees (especially laborers and crew supervisors with limited English and no paperwork) and keep them in line.

One ex-employee told us in an email “When I worked at the Palm Springs office David Krubinski Mazor was the direct boss, and came into the office sometimes functioning as such, but on paper Wanke is the owner.”

A second email delved further saying “I had always suspected he kept his partnership with Wanke secret because he had conflicts of interest or tax evasion or some kind of wrong doing. I don’t know exactly the reason for him being so paranoid about people knowing he has always owned and still owns WICR.  He is planning on owning 50% of WICR for the next 5 years as he has promised his son Sean Krubinski that he will sell him his shares over the next 5 years until Sean is full partner and Wanke is going to retire.”

Ortiz said they would get paid through a system where the foreman would get paid the workers money and he would then pay out cash to the workers.   Undocumented workers would be given t-shirts and put on jobs at HOA’s and Apartment complexes after being picked up at a nearby Home Depot parking lot.

A copy of a “Bill” as listed on WICR’s check stub shows payments made to Jose Ortiz, which he claims then was passed onto the undocumented workers. Unknown is whether social security/taxes were “deducted” from the gross amounts due from their hours worked on a piece rate.

ORTIZ ALLEGES WICR FAILED TO OBTAIN BUILDING PERMITS & OMITTED CRITICAL RAILING BRACES
We’ve obtained a copy of the complaint letter Jose sent to CSLB along with the reply letter he received back from the CSLB. The letter states that the CSLB will be investigating Jose’s allegations of WICR’s failing to obtain building permits for work done on some condo units at Sea Cliff on the Greens HOA in Huntington Beach. CSLB has opened an investigation NA 2013 11916 concerning License #  745936  which is assigned to WICR. 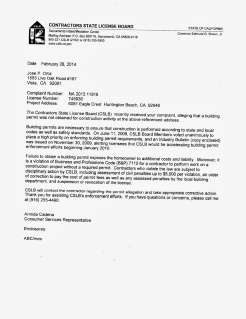 Ortiz claims in his complaint that plywood WICR was contracted to replace was not in many cases, omitting labor costs and material costs and therefore increasing WICR’s profits. Ortiz also claims in his complaint that critical braces for the balconies railings were omitted, leaving railings vulnerable to failing if someone leaned on them.  Fasteners required for railing use were also switched to a cheaper fastener to save money according to Ortiz.

UNDOCUMENTED WORKER ALLEGEDLY INJURED ON HOA JOB SITE
A worker injured on a job was allegedly discouraged from reporting  the injuries according to Ortiz, instead it is alleged that  Sean Krubinski  took the injured worker to a med stop type facility and paid the doctor to sew the wound up. Pay was then allegedly docked from the foreman Jose Ortiz. Over several weeks after the alleged incident, the injured employee was pressured and hounded until he quit. Ortiz alleges that David Krubinski told him that reporting the injury would damage their chances of getting government contracts.

A document we received from Jose by the injured worker, Jagger Hansen testifying  to the event is below. 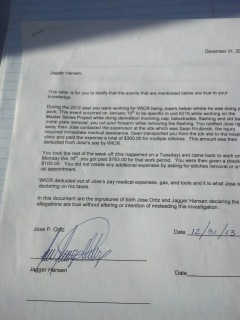 A copy we received of WICR’s response follows-

Note the denial of knowledge of the injury and the threat to sue for slander and libel. Intimidating the Hispanic workers with “Irina Drill, international lawyer” was a common occurrence according to Ortiz. Drill is the company attorney for WICR according to Ortiz. Drill is also the wife of David Krubinski according to the three we’ve spoken with. A look at the firms website shows that Irina Drill has changed her name to Irina Mazor, due to their recent marriage. The firms name is now Lindborg and Mazor LLP.
Interestingly, Ortiz provided us with a copy of an email he received from David Krubinski/Mazor that clearly acknowledge the injured employee and describes how the injured employee is threatening to file a workers comp claim. Krubinski states that WICR paid the medical bill and deducted that cost from Ortiz’ pay.

Something tells us the State of California will want to know more about this.
PERSONAL PROTECTION EQUIPMENT REQUIREMENTS ALLEGEDLY IGNORED
Ortiz also alleges that use of Personal Protection Equipment (PPE) safety equipment such as respirators and knee pads and eye protection was routinely discouraged and where any purchases made of such with a company Home Depot card would have the purchases deducted from the employees paycheck.
Ortiz said he read MSDS sheets of the various products they applied and the sheets warned of using respirators and protective goggles and gloves for a waterproofing product WICR used that was a two part mix that created a strong odor and made the men using it feel dizzy. Ortiz also alleges that many workers complained of sore throats or dizziness. WICR bosses denied the employees request for a doctor. Instead Ortiz alleges that the employees were pressured until they “quit voluntarily”.
PIECE WORK PAY
Ortiz alleges that WICR used a piece work pay method where the workers were paid per task-ie install waterproofing on 3 decks and you get paid $xxxx.00. He further alleged that  for the hours they worked they were told to only show 40 hours on their time cards and any other hours worked should be shown a “drive time’. There are very specific laws in California regarding piece work rates relating to “drive time”, overtime and more. There’s an interesting read at cookbrown.com on the perils of piece work pay here http://www.cookbrown.com/doc.asp?id=612.
If Ortiz is correct and can prove his allegations, a class action could be opened that would enable current and ex-employees to claim unpaid wages. According to CookBrown.com, years of failure to pay wages correctly is potentially ruinous for a company if an award is made.
Ortiz provided us with a copy of an email from David at WICR.net regarding their take on back pay owed. WICR claims that by signing a paper the employee is acknowledging being paid in full.

It seems there is a lot more to find out and report on. All instances described above are allegations at this time. If you have worked for WICR, either in the past or currently, we invite you to tell us your story. Pictures, documents, emails etc are appreciated to document claims. Contact us at Bill@deckexpert.com
In accordance with privacy concerns amid an ongoing investigation, CSLB declined to comment for this story.
Inquiries made to David Krubinski/Mazor requesting comments were not replied to.
You can also contact the CSLB or Department of Industrial Relations with complaints or questions about work conditions, overtime, piece work and anything construction or employee related.