We’ve got three items today that prove that Krubinski lies under oath…,and apparently in everday emails too. Plus don’t forget we already showed you that he owns WICR…maybe he never said he didn’t…but it sure was kept a secret for a long time…

Can you trust someone who is caught again and again in testimony under oath? Can you believe anything they say after being shown that they are a liar? Probably not…but you decide.

Our first case is an older case, Krubinski vs REFCO et al, where Krubinski was a participant in an investment club…he lost a lot of money on “strangles” and sued…where he was found to have given testimony under oath that wasn’t very…truthful shall we say?

refco lawsuit  This is a long document, scroll down to pages 95-100 to read about Krubinski’s “generally incredible” testimony…and that ain’t good as in “you are incredible”, in court speak I it means you are a big fat liar…

“Krubinski was a witness in this proceeding,
one the Court finds to have testified in a generally incredibly
manner. Obviously, although not dispositive on the issue of
credibility, Krubinski has an interest in the outcome of this
proceeding. In addition, his testimony was variously
inconsistent in light of his earlier statements, inconsistent in
light of the documentary evidence and internally inconsistent.
His demeanor further undermined the Court’s confidence in
Krubinski•s reliability as a witness.

In addition to being substantively inconsistent, Krubinski
was evasive on the stand. See, ~~ id. at 283. Moreover, his
demeanor left much to be desired. Having considered Krubinski’s
testimony in light of the record as a whole and his manner on the
stand, the Court finds him to be generally incredible and, on
most matters, less credible than respondents’ witnesses.”

“Given Krubinski’s lack of credibility, the Court does not find that Krubinski
failed to execute the partnership account application.”

Our second case is where Dave Krubinski was caught lying is in a SLAPP suit where he sued someone who made comments on the Mesquite Country Club HOA website/forum. Krubinski was President and some event took place where a ;lock was cut on a door…and he lied about seeing it happen. dk schmutzer anti-slapp win 52908 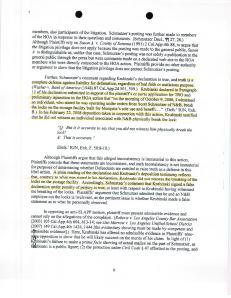 Our third case is an apparent lie in an email where he tells someone he hadn’t been involved with WICR for over 10 years…when in fact just 5 years before he was listed as a partner with Fred Wanke. 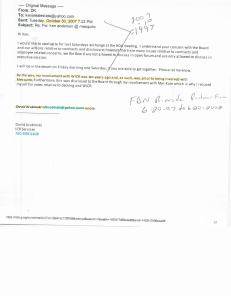 So evaluate these documents and formulate your own opinion on whether Krubinski can be trusted to tell you the truth…we have our opinion formed, what’s yours? Tell us in our poll.

TRUTH IS A COMPLETE DEFENSE AGAINST LIABILITY FOR DEFAMATION, REGARDLESS OF BAD FAITH OR MALICIOUS PURPOSE Krubinski vs Schmutzer