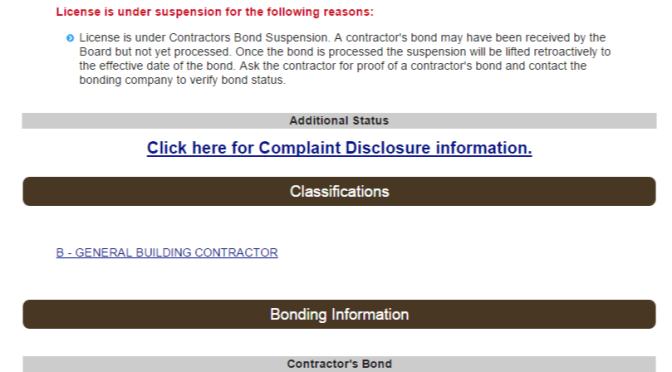 A large applicator of David Mazor’s aka David Krubinski’s Nevada Coating System products won’t be purchasing any products for the time being. DeckTech Inc of Grover Beach just had their license # 796956 suspended by the Contractors State License Board  after their bond company cancelled their bond on Febrary 4th.

While financially it may not dent Krubinski’s wallet to badly, it probably dents his pride when one of his pet companies has had their license suspended twice within 15 months, once for not having a workers comp policy and now for a claim made against their surety bond held by American Contractors Indemnity Corp according to a spokesperson I spoke with there.

Indeed, Krubinski loved to tell me that ”  Nevada Coatings requires only properly licensed and financially stable companies install our products, ensuring the end user has necessary protections.”  So I’ll take this to mean that DeckTech can’t be a authorized applicator anymore? If Krubinski is so concerned ensuring that their end user has “necessary protections”, that should include removing applicators who have pending suspension or revocations of their license hanging over their heads right? Krubinski doesn’t want to do that in my opinion…that would dent his sales and wallet since he doesn’t appear to have to many NCS applicators that I can find. Or at least any who admit that they are on the web…

In the meantime, while DeckTech’s license is suspended, they can’t contract for work perform any work, have employees on your job site for any reason…so if you have any questions or concerns, contact CSLB for latest updates on license status and more.